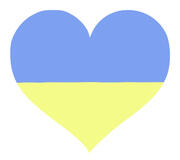 HOW TO SUPPORT UKRAINE

Below are various charities to help support Ukraine. Some text/copy that you see below was written by the Kyiv Independent journalists. I do not finacially profit from any contributions to these charities. This was simply made to share resources to help Ukraine.

Click on the buttons for important reminders about the Russian-Ukrainian War.

CHARITIES THAT HELP THE WAR EFFORT

Donbas SOS: This organization helps those who live in the Donbas war zone, those who relocated to other parts of Ukraine, and freed prisoners of war. It offers legal support, accommodation assistance, and psychological aid among other things.

Crimea SOS: This organization has been helping internally displaced people from Crimea since Russia occupied the peninsula in 2014. It documents Russian authorities' repressions against Crimeans and advocates for the end of the occupation.

Hospitallers: This is a medical battalion that unites volunteer paramedics and doctors to save the lives of soldiers on the frontline. They crowdfund their vehicle repairs, fuel, and medical equipment.

Tabletochki: This foundation has been supporting children with cancer for 10 years. They procure medicines, equipment, and arrange overseas treatment, among other things.

ChildrenWeWillMakeIt: This movement grew out of a campaign that raised $2 million to get the world's most expensive medicine for a Ukrainian boy with spinal muscular atrophy. It now fundraises for the treatment of other Ukrainian children with SMA.

Ruka ob Ruku: This is a running club for children with disabilities. The initiative gives children an opportunity to train and take part in races together with their parents and volunteers.

Territory of Good: Helping Ukrainian army and kids in the war zones of the Donetsk and Luhansk regions.

Ukraine Humanitarian Fund: The Ukraine Humanitarian Fund is one of the UN's country-based pooled funds. Contributions are collected into a single, unearmarked fund and managed locally under UN leadership. As crises evolve, funds are made directly and immediately available to a wide range of partner organizations at the front lines of response. This way, funding reaches the people most in need when they need it.

Voices: Charitable Foundation Voices of Children helps children affected by the war in eastern Ukraine. They provide psychological and psychosocial support to children. It helps them overcome the consequences of armed conflict and develop.

UNICEF Ukraine: As tensions rise in eastern Ukraine, UNICEF ramps up efforts to deliver aid to hundreds of thousands of children and families whose lives and futures hang in the balance. How UNICEF is working to ease extreme hardships brought on by seven years of armed conflict and to meet urgent and escalating needs for safe water, health care, nutrition and protection.

World Central Kitchen: Working at a 24-hour pedestrian border crossing in southern Poland, WCK began serving hot, nourishing meals immediately. Now, they’ve expanded their efforts to serve people across the region in Romania, Moldova, and Hungary. WCK is also partnering with restaurants inside of Ukraine to get hot meals to anyone in need.

CHARITIES FOR THE ELDERLY

Happy Old: This charity provides older people across Ukraine with groceries and medicine, holds educational, entertainment, and sports events, as well as helps with employment. They even created a modeling agency for the elderly.

Let's Help: This charity cares for older people living alone and helps state retirement homes. They also advocate for better treatment of older people by the state, including providing people aged 60+ with easy access to education.

Starenki: It’s a charitable initiative devoted to issues of old age in Ukraine. They help lonely seniors by providing them with groceries and hygiene products.

Women Perspectives: This organization has been helping women who have faced domestic violence, discrimination in the labor market, and other issues. The NGO works with local and state authorities to promote pro-equality gender policies in Ukraine.

March Zhinok (Women's March): Every year, on March 8, this initiative holds a rally promoting gender equality and the protection of women from gender-based violence. Currently, the organization is petitioning for Ukraine to adopt the Istanbul Convention.

Blood Agents: It is an NGO that promotes regular, conscious and gratuitous blood donations. They have encouraged people to donate blood over 5,000 times over the past six years.

Sirius: Is the largest shelter for stray animals in Ukraine established in 2000. Its capacity is over 3,000 animals. The institution crowdfunds for animal feed, veterinary drugs, construction and repair of enclosures, and other needs.

Happy Paw: Is a charity dedicated to solving the problems of homeless animals in Ukraine. The charity helps owners find lost animals, sterilizes domestic animals of people in need & holds lectures on humane treatment of homeless animals for schoolchildren.

UAnimals: Is a movement for protecting animals from exploitation & abuse. The organization managed to achieve a ban on animal circuses & persuaded many designers participating in Ukrainian Fashion Week to abandon natural fur.

CHARITIES FOR THE ENVIROMENT

Ukraine Without Waste: It is a Ukrainian non-profit promoting the practice of sorting household waste. They educate companies on how to go green at their offices, and hold lectures for the wider public.

Laska: It’s a chain of two charity stores in Kyiv that promote conscious shopping. They accept donated clothes, resell 15% of them, and send the rest to orphanages, homes for the elderly and centers for people with disabilities.

CHARITIES FOR THE HOMELESS

Help the Homeless: This initiative supports homeless people & the elderly in need, by providing them with free meals, medicine, hygiene products, clothes & shoes. Launched by a group of volunteers in 2016, the organization has been relying on crowdfunding.

Parkhomivka Museum: The museum, located in a small village in eastern Kharkiv Oblast, is an 18th-century villa that offers a permanent collection of exhibits by artists as iconic as Picasso, Malevich & Manet. You can support it by coming & buying a ticket.

Save Kyiv Modernism: Is a movement that unites architects, designers and activists who advocate for the protection of the remarkable Soviet modernist structures across Ukraine.

FrankivskToCareAbout: Is a movement for the preservation of architectural heritage in the western city of Ivano-Frankivsk. Founded in 2016, the initiative renovates old wooden doors of the city's ancient buildings.

Slidstvo: Is an independent agency launched in 2012 that produces award-winning documentaries exposing corruption. They have investigated mismanagement of prisons, fraud, money laundering at PrivatBank & the assassination of journalist Sheremet.

UKRPravda News: Founded in 2000 by Gongadze, a prominent journalist who was killed the same year, this publication is among the most influential in Ukraine. The reporters break political scoops and unmask officials who abuse their power.

Zaborona Media: This is an independent media outlet founded by journalists. They investigate topics such as violations of Ukrainian workers’ rights in the Middle East, arms trafficking, and corruption in the construction sector.

Svoyi: Svoyi gives free oxygen concentrators to people who contracted COVID & can’t be hospitalized due to personal circumstances or when hospitals are overflowing. It also helps those discharged too early in favour of patients in more serious conditions.

Monsters, Inc.: This organization is based in Odesa and provides emergency medical aid to people living in the region. They also help COVID hospitals, procuring medicines and equipment.

Ukraine.au: The official website of Ukraine. News and stories on Ukraine along with more ways to support/donate.

Emergency Handbook: A handbook providing details about what to do in a case of emergnecy or war in Ukraine.

SUPPORT UKRAINE AND THEIR ALLIES!

PEACE FOR UKRAINE, FREEDOM FOR RUSSIA!